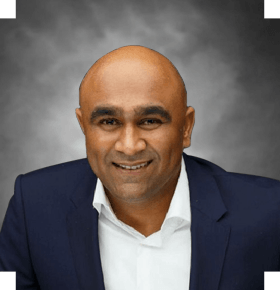 Dr. Mohammed Ahmed is a prominent Neuropsychiatrist in Southern California, and nationally recognized for interventional neuromodulation in Traumatic Brain Injury (TBI). He is board certified by the American Board of Psychiatry and Neurology (ABPN).

Dr. Ahmed received his MD from Karnataka University in India. He went on to complete his residency training with a focus in Neuropsychiatry at Wake Forest University Baptist Health in Winston-Salem, North Carolina. Dr. Ahmed has double fellowship training; Behavioral Neurology/Memory Disorders/Dementia at the Veterans Medical Center, and Shiley Marcos Alzheimer's Disease Research Center at the University of California, San Diego and in Neurorehabilitation (Brain & Spinal Cord Injury) at Wake Forest University, Winston-Salem, North Carolina. He did additional training in TBI as a part of the Polytrauma Care Consortium of the Veterans Hospital in Salisbury, North Carolina under nationally recognized TBI experts managing veterans with war related brain injuries.

Dr. Ahmed specializes as an expert in the treatment of various brain disorders using neuromodulation/Transcranial Magnetic Stimulation (TMS). He trained at the Berenson-Allen Center for Noninvasive Brain Stimulation, an affiliate of Harvard Medical School for TMS, and is a member of the Clinical TMS society.

Dr. Ahmed’s niche is in understanding the connection between TBI, and neurodegenerative disorders, such as Alzheimer’s disease and Chronic Traumatic Encephalopathy (CTE). He has been uniquely trained from a neurology, psychiatry, and rehab perspective in treating veterans with TBI and former NFL players. He presented a paper at the Alzheimer’s Association International Conference (AAIC) investigating this phenomenon. Mohammed Ahmed was the first to investigate a poorly defined neurological phenomenon of cognitive anosognosia in veterans with mild TBI. He also participated in a major research project to train physicians to better diagnose Traumatic Brain Injury. Dr. Ahmed’s further research interest is to investigate new treatment options for people with these neurocognitive disorders. He has gained national recognition in treatment TBI/CTE with TMS. He has presented several posters and talks at various conferences specific to this area. He is a well-known medico-legal expert in this arena.

Dr. Ahmed also has an interest in the culmination of arts, creativity, and neuroscience. He produced a film short film, "The Art of Remembering" which was screened at the Neuro Film Festival at the American Association of Neurology (AAN) conference in San Diego, 2013 which can be accessed on YouTube; view The Art of Remembering.

Dr Ahmed has his independent private concierge practice Kaizen Brain Center in La Jolla, where he is the medical director. He holds an academic position as an associate physician/clinical instructor at UCSD in Neurosciences, and affiliate staff at Hoag Memorial Hospital Department of Neurology & Psychiatry. He serves as a consultant TBI specialist for ‘The Hosalkar Institute.’