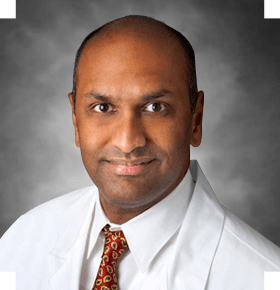 Dr. Sunil Rayan has been a practicing vascular surgeon in the San Diego area since 2004. He received his undergraduate degree in Molecular and Cellular Biology at University of California, Berkeley in 1991. He then graduated medical school at Hahnemann/Drexel University in Philadelphia. From 1996-2002, he was fortunate to train in General Surgery at Harvard University’s Beth Israel Deaconess Medical Center in Boston during which time he did a year of research at Harvard’s Center for Minimally Invasive Surgery. He then matched at his top choice nationwide at Emory University in Atlanta for Vascular Surgery training.

He has been board certified in Vascular Surgery throughout his entire career and holds the Fellow of American College of Surgeons certification. He returned to his native Southern California in 2004 where he was recruited by Scripps. He has remained at Scripps his entire career, getting involved in both Scripps La Jolla and Encinitas in medical staff and leadership. He is currently Chief of Staff at Scripps Encinitas having served roles in Quality, Operating Room, and Interventional Services as well as being the division chair in vascular and endovascular surgery. He practices the full gamut of vascular surgery but specializes in minimally invasive treatment of vascular disease. His inpatient practice typically involves minimally invasive surgery such as EVAR (Endovascular Aneurysm Repair), TCAR (Transcarotid Arterial Revascularization), angioplasty and stenting to name a few.

His outpatient practice is weighted towards the treatment of varicose veins with hundreds of new patients being treated yearly without any advertising except for word of mouth from happy patients and referring doctors. The office has a vascular laboratory offering ultrasounds for carotid, peripheral arterial, venous and aneurysmal disease.

When not working, Dr. Rayan enjoys spending time with his wife and three children and playing golf. He plans on staying in coastal San Diego for his entire career and enjoys being part of the North County community.

Dr Rayan is a consultant vascular surgeon for 'The Hosalkar Institute'.